The rainy season has officially begun here in the Bay Area, because after about 5 months of zero rain, it's supposed to rain for the next several days.  In fact, it was supposed to start last night.  But when my lovely wife and I went out to breakfast, it was sunny and perfect.  Coming home, it was sunny and perfect... with ominous clouds on the horizon.  Still, it seemed like I could sneak in a short ride before it really got serious.  See, even during the rainy season it doesn't rain all that much, but it's always on weekends.  During the week it's fine, but the weekends are always wet.  So I felt like I really needed to take whatever chance I had.

I quickly got ready, and within mere hours of returning from breakfast I was on the bike, headed for Los Gatos. I had on a waterproof coat, and a sweatshirt that I immediately knew was overkill.  I was cold inside the house, but as soon as I started riding, I was fine.

There was nothing more than sprinkles by the time I got to the Los Gatos Creek Trail, so I was a little surprised to see so many puddles on the trail.  It's a nice hard trail, but I guess it doesn't drain particularly well.

Soda Springs Road is a five-mile climb that starts next to the Lexington Reservoir and climbs up the Thayer/Umunhum ridge.  It's a two-lane, sometimes one-lane, paved road serving a few dozen houses, mostly near the top of the hill.  At the top of the hill, there's a gate. 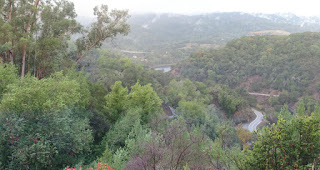 But we're not quite there yet.  Climbing up Soda Springs it was almost perfect weather.  Sprinkles, cool but not cold.  I took this panorama shot looking back at Lexington Reservoir, and you can see the moisture boiling off El Sereno and its neighbors.  Clearly lots of moisture in the air, but hard rain was very infrequent, and I was hardly even getting wet.

Soda Springs Road passes through a patchwork of MROSD land with houses sprinkled around.  Some of the houses are newer, but several have seen a few seasons.  I was a little confused by this house, which has no parking and only this rickety stairway.  Having looked at the map, it appears that there's a driveway behind it that meets up with the road quite a ways away.

Nearer the top, the houses get more frequent.  I got to the intersection with Weaver Road and caught a blast of cold fog coming over the hill.  While resting I had a nice chat with a resident coming up to check his mail.  Sounds like a peaceful life up there, but an 8 mile trip to the grocery store.

Shortly after the chat, the real rain started.  I was immediately soaked, although I thought my sweatshirt might still be mostly dry.  This section climbs about 600 feet in a mile and a half.  I didn't want to stop in the heavy rain and I couldn't find any decent cover, so I just plodded along.

My plan had been to get to the gate across Soda Springs Road (pictured here in a previous trip), rest and eat a bit, then explore a way around the gate that I saw on the satellite image.  I wasn't sure it would work; if it didn't, I'd turn around and possibly explore up Aldercroft Heights Road.  If it did work, the ultimate goal was the Umunhum area.  To get there, I was going to take the immediate right in the picture, which seemed a little less conspicuous to the houses.

You can't just climb over the gate, because they've covered it (and the nearby elements) with some something like pine tar -- incredibly sticky, and a little stinky.  I learned that when I initially leaned the pictured bike against the gate.  Yuck.

There are helpful signs as you approach the gate that tell you the road (and therefore your climb) are ending in 500, then 200 feet.  So I knew I was close when I rounded a corner and... it was open!  Holy crap!  The gate was open!  I rode right through, and immediately ditched my plan.  Visibility by now was pretty poor, and I didn't expect people to be out, so I wasn't as worried about the main road.  And that side road looked pretty sketchy.

This section of Soda Springs Road is a short, straight piece of road heading right up the ridge.  In this close weather, it just went up into clouds.  And it was damned steep.

It was at this point that my lovely wife called to check on me, and whaddaya know, I had service.  I stopped next to a large bush, out of sight of houses, and told the Missus it was going great.  I looked at a map, and realized that I had gone too far up Soda Springs Road.  I wanted to go over Thayer and into the Umunhum area, so I needed to take Loma Almaden Rd, which branches off of this road at some point that I'd missed.  I couldn't tell where, because at this point the phone locked up (moisture?), and I emergency-rebooted it.  But it wasn't coming back, and was just getting wetter, so back in the pocket it went.

Side note: I'm under the impression that Mt. Umunhum has been called Loma Almaden in the past, hence the name of the road.  And while we're at it, Mt. Thayer was once called Mt. Hooker (the same guy's name is also attached to Hooker Gulch, the valley and creek just to the south of this trail).


View Larger Map
Loma Almaden, or at least the turn-off to it, was a tiny little track, easy to miss.  At one point it passes by a white van, which startled me.  I stopped and stared, and guessed it hadn't moved in a while.  That's probably true, since it appears on satellite images.  Still, at the time: creepy.  This track then meets up with what appears to be a better-maintained track that, I think, is clearly Loma Almaden Rd.

At this point I'm at about 3000 feet, visibility is no more than 50 yards, and there's no rain.  Only hail.  Small, drop-sized hail.  And this close to the top of the mountain range, the wind is blowing fiercely, coming up from the south.  The trail is pretty well protected, but in open areas the hail is hitting me hard, and coming up from below.  This doesn't seem proper, but I'm still reasonably comfortable, slowly climbing up Mt. Thayer.

Off to my right was Hooker Gulch and the Los Gatos Creek Valley, with Lake Elsman at the bottom and Summit Rd on the opposite ridge.  But I couldn't see any of it; it was just a cloud.

In one sheltered spot I decided to recharge by eating a Clif bar.  Having mostly eaten them in the summer, I didn't know that they become approximately rock hard in cooler weather.  I ate about half of it, and my teeth mostly survived.

The first sign I was approaching Thayer was this amusing gate across the road, warning of dogs.  Dogs are too smart to be out in weather like this.  All along this area the path is still climbing, not particularly steeply.  Just after this sign a paved one-lane road forks left and climbs the hill, into the clouds.  On the ride I assumed this went to the Mt. Thayer antennas, but looking at the map it appears to be a home.  I'm glad I didn't climb it.  They probably don't get many trick-or-treaters.

On the ride, I thought at this point I had passed Thayer and now would soon be seeing signs of the Almaden Air Force Station.  I was tired and increasingly cold, and presumed there would be more climbing between here and there, but I was excited.

That excitement ran into the next, much more emphatic obstacle.  A 6-foot gate with sharp spikes, covered with barbed wire and some sort of brownish goo.  The barbed wire extended up the hill to my left (which in retrospect was probably the peak of Thayer) and down the hill to the right.  As far as I could tell, there was no getting around it.  I was forced to turn around.

I had high hopes for using this route to get to Umunhum.  First, the climb is easier than Hicks.  Second, it seemed like it came through a back door.  Going up Hicks and Umunhum means that the camera gets a shot of you, which I suspect will summon a ranger eventually.  So this gate is a real blow to my chances of exploring the area.  Eventually it'll be opened up, but I won't live in this area forever.  And to be honest, I want to explore the "ghost town" of the old Air Force station.

Ah well.  Going back was downhill.  Travelling a little faster (but only a little, because a slip in the mud could send me over) and putting in less effort meant that I immediately started getting cold.  And here at 3300 feet, with wet wheels, and not yet on a steep road, I couldn't help but notice that I had to squeeze my (rim) brakes pretty hard to have any effect.  That might be a problem....

I avoided the van turnoff, not because of the van but because the left fork was much better quality, and that right fork was steep.  The left fork, as expected, turned into that side road that I had skipped earlier.  It's a nice little road.  When I got to the end I was happy to see the gate was still open, because I didn't have a plan B.  Maybe I should have investigated my original theory, but it was raining quite hard at this point, and I was cold.

Squeezing the brakes and not pedaling, I eventually realized that I couldn't feel my hands or feet.  In the 20+ minutes it took to get the bottom of Soda Springs Road, I had to stop several times to flex my hands and get feeling back again.  Somewhere along the line the sweatshirt inside my waterproof coat had become fully soaked, so I was uncomfortable and unhappy on the very slow trip down the hill.

I got to Los Gatos, the nearest place convenient to cars, and sent up the flare.  I used my now partly-functional phone to text my wife, who graciously agreed to pick me up.  The sun was now shining, and while it was certainly warmer at this lower elevation the wind was blowing in the next round of rain.  Waiting there on the sidewalk, I was hunched over and shivering, becoming increasingly aware that I was completely soaked through and looking like an idiot.

Car heaters, it turns out, are one of the world's great inventions.  So while that last part of the ride was unpleasant, I was soon warm again.  Later, after a long hot shower, I noticed that my bike clothes were still heavy with water.

The ride was about 28 miles, with over 4000 feet of climbing.  I'm not so sure about that; the maximum elevation was only about 3340, which is 3100 feet higher than my house, and I doubt there was 900 feet of meaningful climb elsewhere.  For most of the ride I had the Garmin 305 recording points every second, and I think that mode overestimates climbs.  The other mode (smart something or other) does much better.
Posted by Ziasus at 10:57 PM