I decided yesterday morning that I wanted to ride my bike somewhere that I haven't been before.  Since I've covered much of the ground that's easily reached from my house, that likely meant driving to the ride, and that opens up a bunch of roads in the Santa Cruz mountains a little north of my usual haunts.

In the end I settled on Old La Honda Road, a road quite popular with bicyclists.  As it turns out, it's the old road to the town of La Honda (as opposed to the current road to Old La Honda).  It has since been replaced by... well, La Honda Road, aka Highway 84. Or maybe New La Honda Road. Why did they replace it? In many parts it's just one lane, often running along hillsides or between redwoods, and thus presumably difficult to widen.  It's therefore a road just for the (many) houses along the road, and bikes. 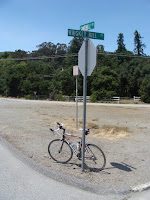 I parked on the Stanford campus, which I take it is much easier on the weekend than it would have been during the week. I took Sand Hill Road past 280 and into the hills. There's a small dirt parking lot at the top of the first hill after 280; that may be something to remember for the next time. From there Sand Hill Road dips down to meet Whiskey Hill Road, an intersection now notorious for being the place where local bike riding and engineering legend Jobst Brandt had a bad crash early this year. Inspirational guy; he was riding this at age 75 and would certainly have climbed much faster than I did today.
This intersection is also directly in line with the end of the Stanford Linear Accelerator, but I didn't know that until after I'd got home and looked at a map.
Sand Hill Road climbs up to meet Portola Road, and indeed turns into Portola Road there. Apparently, right about at that intersection is the site of an 1850s mining town called Searsville. Shortly after the intersection, Old La Honda Road heads off to the right.
Having ridden most of my miles further southeast, I must say that the overall impression I got of the area was: busy. There were dozens of bike riders on Sand Hill and Portola. Always at least one in sight, and often riding in groups. The one thing they all had in common was that they were passing me handily.
Old La Honda Road is a pretty little road, often a single lane and frequently fully covered by a tree canopy. Somehow I had expected the climb to be easy, but my lack of conditioning, the warm weather (perfect by any reasonable standard, but not cool enough to keep me from overheating) and the slightly steeper than expected road really knocked me out. I tried pacing behind a couple of other riders and found that it mostly just tired me out. One must climb at one's own pace. In my case that meant I was being passed by everyone, young and old, male and female.
As I said, the road is often lined by trees, and just as often by houses, at least on the lower stretches. That's good for shade, but lousy for views; I don't think there's a view into the valley on the entire road.

A little further up the road you start to see redwoods. The road up here appears to be recently repaved, and even seems a little less steep.

I noticed that there's yet another road called Summit up here, in this case nowhere near any summits.

For some reason the bike traffic on the lower slopes largely disappeared as I got toward the top. Maybe everyone just gets an earlier start than I did, but on the entire remainder of the ride, the traffic was what I'd consider normal, not busy.

I take it that a lot of the folks who passed me probably headed north on Skyline to descend on Highway 84. My plan was to go south on Skyline to Page Mill Road, and take that back to Stanford. So I headed south, inevitably upward (Skyline always climbs, in all directions). The first thing you reach on this path is the Windy Hill Open Space Preserve, near which are glorious views both east and west. There's something special about having those long views on both sides of a ridge -- it makes you feel like you're on top of the world.

Skyline climbs to nearly 2400 feet by the time it links up to Page Mill Road. I was expecting, at this point, to coast all the way back into the valley, but Page Mill Road actually rolls a bit near the top. After that section, though, it's a relatively fast descent, across 280 and then one last small hill, and finally back to the campus.

I love seeing new places, and in that regard this was a fun ride.On the other hand, the fact that there are so many people out there interferes with the illusion that you're exploring some exotic landscape. It's all new to me, though, and given the sheer number of roads accessible from this area, I don't suppose this is the last time I'll drive to a ride up here.