Today I went for a long ride through Santa Cruz, and back on Zayante Road.


Consider the rate of posts on this site, you might imagine that I'm doing all sorts of rides and just not writing about them. Perhaps they're not sufficiently noteworthy. And to a degree that's true -- I commute to work on the bike most days, and those rides are clearly not memorable. But all other rides are included here, because I have clearly have no standard for noteworthy-ness. 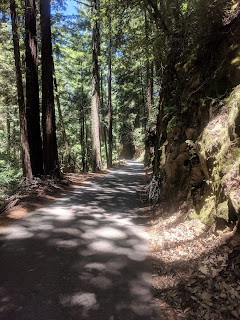 In this case, a long weekend means that I had time for a non-commute ride, despite the heat. I decided to head through Santa Cruz as usual, but in a very slight variation I decided to take Zayante Road back, since I hadn't done that in a while (not that I've ridden anything else in the area recently).

I got started around 8 after watching the end of the opening stage of the Tour de France. It was already a little warm. I felt pretty good on the ride past Lexington Reservoir into Santa Cruz, despite not doing any climbing for a year or so. San Jose-Soquel Road was very smooth on the descent.

I had planned to get lunch at Betty Burger, which is conveniently located and has outdoor tables, which is I think is only fair to my fellow diners. In the event I got there shortly before it opened at 11, so I dawdled. After lunch I was noticeably more sluggish, but it was also much warmer.

Zayante was heavily damaged two winters ago, and frankly I didn't know whether it had been repaired. But that was a long time ago, so I figured all was well. Imagine my surprise when, after climbing much of the way up the road, I started to see "Road Closed" signs. Turning around would have been very costly, and the heat was beginning to sap my meager strength. But living in this area has trained me to ignore most road signs, and this was no different. As it turns out, it was tree trimming. I waved and rode through it.

Today's ride was 71 miles, with 5600 feet of climbing. The most difficult kilometer was on the first part of the Zayante climb, just before the "Road Closed" signs as it happens. That's also when the heat was really getting to me, so it felt difficult, too.