When I rode from Loma Prieta to Umunhum, I went by a trail that runs from that high ridge right down to Alamitos Road.  I'm pretty sure I once saw that trail from a plane, too.  And it shows up on most maps, but it always ends just shy of Alamitos Road.  Does it really go through?

I looked around for descriptions of the trail, but it's a hard thing to search for.  Along the way, I came across a map that showed that the MROSD had purchased an old house on Herbert Creek.  The map showed a road along the creek, heading toward Alamitos Road.  The purchase happened just a few years ago, so there must be a trail through that area.

I had never been to the southern end of Alamitos Road, and now I had two things to investigate.  So on this Thanksgiving morning I bundled up (the thermometer read 30 degrees when I left) and headed south.  I rode past Almaden Quicksilver park, past the really-low Almaden Reservoir, and past Hicks.  And at that point, I was in new territory.

Alamitos Road ends in a little community called Twin Creeks, a collection of small cabins of identical design and color, arranged in cozy clusters.  It has the appearance of an old resort, and sure enough that's exactly what it was in the 1920s.  These days the cabins look their age, and by all appearances are permanently occupied.

Very near the entrance of Twin Creeks is where the Loma Prieta trail is supposed to emerge.  There are a pair of private paths that head south off of Alamitos Road, past a set of cabins, and off to picnic or sports areas, I think.  There were no fences in sight.  I'm reasonably sure that one or both of the paths link up with the trail.  But to verify that, I'd have to poke around too close to people's houses, and I wasn't going to do that.  I wouldn't mind riding past if I was coming down the trail, but nosing around would be creepy.

Nonetheless, one question more-or-less answered.  I'm sure one could ride down the Loma Prieta trail and get to Alamitos Road.

Continuing on Alamitos Road, now heading west, I passed more cabins as the road narrowed from a skinny two lanes to an unapologetic single lane.  Twin Creeks is generally wooded, and by the time the road narrows and starts to climb the valley a bit, it's fully enclosed in woods.  The road turns southwest to follow Herbert Creek, and is paved until shortly after it passes over a bridge. 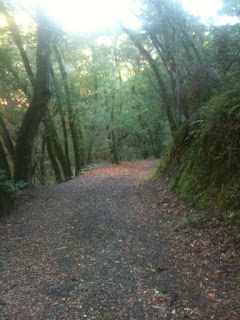 The woods here are gorgeous, with the lovely little stream and bright green moss growing on the trees.  On all sides of the trees, I might add.  It was perfectly quiet.  The morning was still cold and there was certainly no sun to warm me up, but since I was climbing and didn't have to worry about wind, it was comfortable. 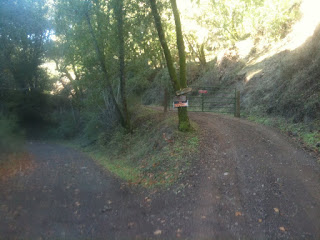 I came to a fork in the road, and chose the left fork, the low road.  It was the wrong fork.  This trail gradually turns south to follow some other creek.  I went along this path for a while as it climbed the valley, until I came across a building in the distance.  I didn't see anyone, but chickened out and turned around.

Had I followed the high road, I would have hugged Herbert Creek, and been mostly on MROSD land.  I realized that as I passed by, but I needed to get back home for Thanksgiving, so exploring that path will have to wait for another day.

The ride home was unremarkable except for the especially vivid shifts in environment.  From a lush, wet forest to dry chaparral to suburban artifice, all within a few miles.

Only about 20 miles today, with a maximum elevation of about 990 feet, at the turn-around point.  Only a couple of the miles were at all new to me, but they pointed the way to a few new possibilities.
Posted by Ziasus at 9:11 PM