Sometimes I ride to explore new areas, but other times I just ride.  Yesterday was one of those other times.  The weather report showed a nice sunny day, and I decided to ride up the Kennedy Trail to El Sombroso.  I've done that ride before, and was wondering whether I might be showing any improvement of form.

It had rained overnight, and was quite foggy when I left in the not-too-early morning.  I expected the fog to burn off before I climbed up to it.  I brought a coat, but before I had even started climbing I was comfortably riding in my T-shirt.
Getting to the trailhead from my house is a good warm up, since you have to climb Kennedy Road up to about 800 feet.  The first part of the trail is flat and was worrisomely muddy.  I don't like leaving tracks let alone ruts, so I was glad to see that the trail was firmer once it turned upward.
The Kennedy Trail up to the junction with the Priest Rock trail is about 4 miles long and climbs about 1800 feet, for an average grade of about 8.5%.  But that's a little deceptive because there's a drop near the start of the climb and a false top near the end.  In between, the trail climbs 1600 feet in about 2.7 miles, for a grade over 11%.  That may not sound like much, but when you're lugging as much weight as I am, it's huge.
In some sections, the trail was muddy enough to stick to the tires, and my traction wasn't great.  I mention that only to say that everything else was perfect -- cool but not cold, some fellow riders but not too many, breezes but no wind.  Couldn't ask for better.
In the middle of the ride is a flat section with a huge oak tree right in the middle of the trail.  On hot summer days this is a great place to recover.  Most weekend days, you'll probably even get a little company here, so you can commiserate in your suffering.
On this cool winter day, the fog was sitting at this level, so it was an even better place to spend a little time.
Shortly after the tree, a few hundred feet higher, the fog had thickened.  No views of the valley at all.  One of the little rewards for climbing a hill is the view at the top.  I was hoping this stuff would burn off, but it was already midday and it looked like the fog was winning the battle.
One nice effect of the fog was that it masked the length of the climbs in this section -- you couldn't see the top and get dispirited.  I'm not sure the ramps in this section are really steeper than those lower down, but after all that climbing they seem so.
As I reached the junction with the Priest Rock trail, I had finally climbed out of the fog into crystal clarity.  The fog sat thick across the whole valley, leaving just the surrounding hills in view.
I've climbed up the Kennedy Trail to this point several times, and I'm justifiably proud that I can do it.  There can't be many people who could accomplish such a feat, right?  Well, let me introduce you to the annual Kennedy Trail turkey ride.  Early Thanksgiving morning, a bunch of riders climbs up Kennedy and traditionally enjoys a little snack at the top.  A bunch of riders?  The most recent ride attracted hundreds -- one estimate put it at 2000.  Young people, old people, men, women, kids.  I complain about carrying my fat keister up the hill, but people tow kid trailers up there.  At least one guy towed a cooler.  It gives one perspective.


There was a couple at this junction deciding whether to head down to Lexington, or continue on toward El Sombroso, which they hadn't done before.  I described the trail.  The fact is, I don't much like this next section.  It has a couple of ramps that I had to walk up on this ride, and at least one long hill that I'll never climb.  I hate pushing the bike.  Plus it's up-and-down, so you can't even surrender -- there are climbs either way, so you're trapped.
The couple decided to try it.  In the picture here, if you zoom in, you can see one of them nearly clearing the hill I'll never clear.  On his first try.  Sigh.  To be fair, he had described coming up the Priest Rock trail as not particularly difficult, so he may be superman.
The first time I rode this route it was summer, and I had emptied my water bottles by the middle of this section.  The sun was high and I was broiling, stopping in the shade of every shrub just to keep my temperature down.  As I was feeling sorry for myself, along comes a runner.  At least 5 miles and 1800 feet from civilization, this guy is running the trail.  He's got to be 70, and is carrying no water.  He mentioned finding water further along the trail, and I had to break it to him that there's none to be had on any of these trails.  He patiently explained to me that he was talking about water from one of the many streams up here.  I aspire to that level of resourcefulness. 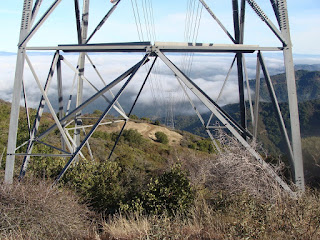 Eventually the trail gives up the up-and-down indecisiveness and settles on "up", very near the junction with the Limekiln trail.  The trail here parallels the power lines, which cross right over the top of El Sombroso.  Or as near the top as you'll get without some serious bushwacking, anyway.  There's a little spur trail up here, presumably built to service the power lines, that's constitutes the top of this ride at just short of 3000 feet.  From this less than bucolic spot you have good views of Umunhum and the Rincon Creek watershed, but no view of San Jose.  To see that, you'd have to get to the true peak, which is protected by forbidding scrub.

The trail, which by this point is called the Woods Trail, continues counter-clockwise around the peak and heads down.  Actually, at this point there are only two brief uphill sections on the entire trail down to Hicks Road: one right away, near the peak, and the other at the very end.  Neither is steep at all, but tired legs feel every rise.

I've only ever ridden down this trail, never up.  It seems impossibly steep, and if that's not tough enough it's loose and rocky, too.  But people do ride up it, including a pair of riders I briefly talked to on this ride.  I must try that someday.

The trail isn't too bad, but it has the quality that a mistake on the descent could send you over a cliff.  So I tend to take it pretty darned slow.

It's on this part of the trail that you get the best views of the box on Umunhum.  The mountain is incredibly steep from this perspective.  Apparently you can climb Umunhum along one of the ridges, but not from this direction.  The preferred route starts on Barlow Road, but apparently there's an overgrown trail on the ridge from El Sombroso, too.  I looked for that latter trail as I passed; it's completely hidden from Woods Trail, and hiking reports say it's not really passable.  But it shows up clearly on satellite images, which tells you how misleading those enhanced images can be.

After the initial steep drop from El Sombroso to about 1800 feet, the Woods Trail heads generally downward at a gentle slope, past Barlow Road and toward Hicks.

According to a historical sign in Quicksilver park, the Woods Trail was once the Wood Road, built to feed wagonloads of wood into the mercury furnaces in the mines here.  Considering the years the furnaces operated and their appetite for wood, these hills must have been stripped bare.

I went down the north side of Hicks, which was uneventful except for a slippery patch of mud right at the U-turn that defines the bottom of that very steep hill.  I would have expected to see a pile of mangled road bikes off the side of the road, but happily there were none.

The Guadalupe Reservoir certainly looked low. I suppose it hasn't had the chance to recharge yet, but the stream filling it is a trickle.

A good ride for me, and considering how exhausting it was, surprisingly short.  Just 24 miles or so, and the computer reports about 3700 feet of climbing.  It was probably closer to 3400, since I also explored some unfamiliar hilly roads on the way home. A good ride, but I'll need to be a lot stronger before I consider towing a cooler behind me.