Today I rode my bike up Mont Ventoux, the Giant of Provence.

I've been a little worried about this ride, especially since a guy at the top of Alpe D'Huez told me how tough it was. It's about the same elevation as Alpe D'Huez, but you start 600 meters lower. Depending on how you count it, it's between 14 and 20-some kilometers long, and it's got 9 straight kilometers whose lowest average grade is 8.6%. It's also famously exposed to the sun, and it was supposed to be pretty hot today. This could be nasty.

I wanted to get an early start, but I had to move my stuff to a new room before I left. As it turns out, the room that should have been mine had a broken bathroom, so I was staying in a double room. But now they needed that double, so I had to move into a room whose bathroom was still in pieces, apparently in mid-repair. OK, not ideal, but they had all day to get it back together.

I got moving at about 9:30, riding amongst traffic out of town on the Avenue du Mont Ventoux. Oddly enough, that wasn't the road I really wanted, but it intersects after a few hundred meters with D974, which would take me right over the summit.

I had looked at a ride profile generated by BikeRouteToaster.com, so I knew that the road climbed very gradually and wouldn't descend at all until the summit. Often I don't like this sort of low grade climb because it just makes me feel slow. But in this case I was happy for every meter gained on this easy grade, since it was one fewer that would have to be earned on the steeper grades to come. 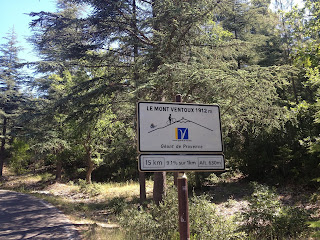 As I entered Bedoin, I started to see lots of cyclists, making these skinny roads very inconvenient for drivers. I stopped at the grocery store to get some drinks, then headed up the road. At this point the roads runs among vineyards and the grade is still slight.

Eventually the road gets much more steep, but as compensation enters the pine forest. As with the other climbs I've done here, there's a lot of car traffic on the hill, and today I was noticing that the Diesel exhaust was especially nasty.

Despite the traffic I rarely saw any incidents, but there was one on this section. A car behind me slowed, waiting for a descending car to pass so it could get past me. But the descending car, for reasons unknown, slowed to a crawl just as it reached the ascending car, effectively blocking the road. A descending cyclist had to go into a two--wheel skid to avoid the descending car's trunk. I couldn't afford to weave out of my line at that point, so I couldn't turn around to see what happened, but I didn't hear contact. I think the descending car got moving quickly enough.

About 6 kilometers from the summit is a little rest stop called Chalet Reynard, packed with cyclists on their way up or down. I had been worried about whether my water would hold out, so I stopped to buy two cans of tea and three little bottles of water. I left well hydrated, and lighter by (gulp) 12 euros.

After the chalet, the ground is increasingly covered by chalky rocks, and trees are much more sparse. We're on the bald top of the mountain, and you can see the road wind up to the tower at the summit. There's nothing up here to baffle the fierce wind. As you change direction, it might blow at your back, making the grade seem easy. Turn a corner and the wind's in your face, forcing you to inch up a 10% grade in a full aerodynamic position.

Mont Ventoux has climb markers (almost) every kilometer, and again I got to the 1 KM remaining marker wondering how all that road I could see ahead of me could be just one kilometer. This time, I was right. Unless I'm missing something, the marker is off by at least a few hundred meters.

Within this elongated last kilometer is the memorial to Tom Simpson, who died somewhere along this section of the road in the 1967 Tour de France. There were plenty of people paying their respects, as well as a motley collection of offerings. Just today there was an interview with Paul Sherwen in l'Equipe, partly covering Simpson's influence and death, even though this year's tour isn't coming through here.

I had always pictured that scene with an unforgiving sun beating down on a rider in an alkaline landscape. I don't know what it was like on that day, but today the wind was so strong up there that it was disorienting. You couldn't hear anything but the wind, shouting in your ears. It was a warm day today, but you didn't feel the sun's heat at all. Of course the wind dehydrates you even more.

Eventually, you reach the summit. Apparently the building and its tower are some sort of weather observatory, but frankly I'm not clear on that. There's a little store, and at least on this day there were stands selling jellied fruits and sausage. Well, why not?

The views are extensive, but distant, like you're looking out of an airplane window. Unlike the other climbs I've done on this trip, this climb actually takes you to the summit of the mountain, not just a pass. And even more unusually, this mountain is relatively isolated, although technically part of the Alps. It's a little like how Mt Diablo relates to the rest of its range. In any case, this means you can see for miles all the way around, to the limits of the haze.


To me, the two most interesting views were of the road I had just climbed, and the view on the north side of the mountain, which reminds you that this really is part of a range. I would have taken more pictures in that direction, but the wind was so strong that it felt like it could blow the iPhone right out of my hands.

I went down the north side of the mountain, toward Malaucène. The descent was pretty shaky until I got under tree cover, at which point there was really very little to limit my speed. The road is smooth and there's plenty of visibility. I'm a pretty timid descender but nonetheless comfortably maintained 45 mph, only slowing down to avoid interacting with cars too much.

Toward the bottom of the hill I noticed a little sign for a 13th century chapel. I suppose this kind of thing litters the landscape around here, but for me it's well worth burning some brake pad to stop and take a closer look. I looked around the front of the chapel for a while, and spent several minutes reading the brief tourism sign (my French ain't so bon). All the while I was, of course, the only person there. Amazing.

Shortly afterward you get to Malaucène, which is basically a few blocks of cafes catering to cyclists, surrounded by a very old town.

Outside of town you climb at a gentle grade for a little while, then basically descend all the way into Carpentras.


Today's ride was about 48 miles, with over 6200 feet of climbing. My analysis program identified two distinct climbs: the first started just outside of Bedoin, and ran for almost 2 miles at a 5% grade. The second started at St. Estève, and ran 9.8 miles with an average grade of 8.6%, climbing over 4400 feet without much of a break. The most difficult kilometer was very near the top, with an average grade of 11.4%.

With this climb, I basically ended the challenging portion of my cycling vacation. All my climbs are done; any rides in my future will be for sightseeing only. That's a little sad, but my butt and my knees would be happy about it.
Posted by Ziasus at 1:38 PM