Yesterday I rode my first century of this century, in the form of the Hamilton/Livermore loop.

View Livermore in a larger map

One of the first times I ever climbed Mount Hamilton, I found myself riding the last couple of miles with another tired-looking rider. He told me that he had started out in Livermore, and while I didn't really know where that was, I knew it was pretty far away. Since then I learned that the loop over Hamilton and through Livermore was popular.

Last week I tried to do this same ride, but it was just too cold for me. Yesterday's weather looked perfect -- warm but not hot.

I drove my bike to the Berryessa Community Center, and managed to get started at just about 8 AM. The air was cool and especially clear, and I made my way up to the observatory with no incident. Despite the perfect day, there didn't seem to be many riders on the climb, although once I got to the top there were plenty of them.

The views were amazing, better than I've ever seen it before. With the clear air you could see individual buildings in town. The curve of Monterey Bay was visible to the south. The wind was fierce, which is normal on the summit, but not too cold. 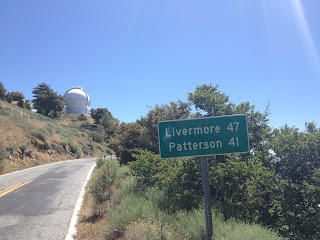 I wandered around the observatory for quite a while, and drank three cans of some juice drink from the vending machine. Finally I went down the driveway, filled my water bottles, and headed down the back side of Hamilton for the first time, off into the unknown.

There were lots of riders crawling up what I understand to be the more difficult side of Hamilton. The Stanford cycling page mentions that this descent is more challenging than the other side, but since I go pretty slow it didn't seem noticeably different.

The road levels off at about 2000 feet, which I hadn't actually expected. I had assumed that the elevation of the climbs on both sides of the mountain were similar, but it looks like the backside, while steeper, is more like 2300 feet, rather than the 4500 feet when coming from San Jose.

San Antonio Valley Road climbs gradually to perhaps 2300 feet, reaching this local maximum very near the point at which it turns northward. The road twists a lot, and I passed through this eagerly anticipated turn without recognizing it at the time. At some point I realized I was in a much wider valley and had been seeing my shadow directly under me for quite a while, and finally twigged on.

About 37 miles from the start of Route 130, I arrived at The Junction, the only food stop on this long road. I had a BLT in the company of perhaps a dozen other bike riders and several motorcyclists. The bacon was really quite good, so the sandwich was great.

I talked to a pair of riders who had also come over Hamilton, and who surprised me by heading back that way. I hadn't even considered such a thing, but now I may try that myself. If I ever want to climb the back side of Hamilton, it's certainly more realistic (for me) than a clockwise Livermore/Hamilton loop.

The wind was kicking up, several times forcing me to chase down napkins or my plate. And naturally it was blowing from the north.

The wind continued to blow down the valley, which was an unusual experience for me. Riding in the Santa Cruz Mountains I'm normally sheltered from the wind. In this section, I found that I didn't really mind the wind, despite its strength. I was either headed uphill, in which case it didn't matter, or downhill, when it just slowed me a little (but I was in no hurry). Had I been riding on flat roads I suspect it would have been a different story.

As I reached the high point of Mines Road, still 25 miles from Livermore and riding into substantial headwinds, I was sure that I would call my wife for a rescue in Livermore. But after that high point the road slopes gently downward, giving one an unearned feeling of strength and minimizing the impact of the wind. Before long my confidence had returned, and I was sure I'd complete the ride.

As you ride north, you go from a scrabbily wooded valley to the familiar grass-covered, rounded hills, already dormant for the summer. The road turns from generally northward to generally westward, and as it did so the wind increased. But in this section the road also begins dropping more steeply, so I was able to marvel at it. I wonder if it's always this windy?

When I got to Livermore, I realized that, based on the direction the various flags were blowing, the wind was now coming from where I wanted to go. This seemed entirely unreasonable to me, mostly (in retrospect) because I hadn't understood the route. I thought I had approached Livermore from the south, but in the windiest section I was actually heading west. I thought I would be heading south again, but Highway 84 heads southwest. So the wind, blowing basically toward the east, was largely against me, but it appeared to me that it had turned around to face me, personally.

I rode across town on Concannon, a generically suburban road, and stopped at Subway for some drinks. Then I headed south on Holmes Street, which turns into Vallecitos and then meets up with 84. This section was easily the most difficult part of the ride. Highway 84 climbs over a little pass on its way toward 680, and the wind blasted through it like a wind tunnel. The road climbs only a couple of hundred feet at a low grade, but this was easily the hardest climb of the day. So much for my idea that wind doesn't matter on the uphill. Between the wind and the loud traffic, I didn't like this section at all.

After descending to the intersection of 84 and 680, I took Calaveras Road south, toward the reservoir. Signs warned that the road was closed until next weekend, but I had read somewhere that it was open during the weekends. Of course the signs gave no such indication, so I was a little worried. Nonetheless, the wind and traffic noise was gone, and I was determined to enjoy the road even if I had to turn around.

The gate was indeed open. At this point I was about 85 miles into the ride, in the cooling late afternoon. Calaveras Road, running along the east side of the ridge, was largely shaded, and finally free of the hateful wind. The whole run next to the reservoir felt like a reward, from the gentle climb to the twists and turns among the hills. I had dreaded the climb up to this road, but in the event it was perhaps the most satisfying part of the ride. By the time I got to the steep and surprisingly long descent into Milpitas, I was renewed.

I rode south on Piedmont to Berryessa, and was gratified to see that the odometer ticked over 100 miles before I got to the car. I was fully prepared to ride in circles if I had to, but I was spared that indignity.

The ride was 100.3 miles, with 7800 feet of climbing. It took me almost 11 hours, 9 of which were in the saddle. The most difficult kilometer was definitely climbing over the pass on 84, but since my little analysis program doesn't know about wind, it settled on a stretch near the top of Hamilton. That just goes to show how gentle rest of the climbs were.

I know there are plenty of folks who bang out this kind of ride on a typical weekend, but for me this was a big achievement. My last century was nearly 20 years ago, and it was dead flat. As I write this a day afterward, I'm a little tired but not completely drained. A good, long, day out.