On July 8th I climbed Alpe d'Huez, and enjoyed a ride over the Col de Sarenne.

Since I got to France I've been waking up annoyingly early, like 04:00. Tuesday was no different, but in this case I fell back asleep and missed breakfast. I ate yesterday's spare packaged sandwich instead.

The morning was rainy and cold. The first part of the ride is a descent, and the rain started shortly after I did. Once my feet were soaked I was once again bitterly cold on the bike. My shivering was making it hard to keep the front wheel steady.

I had never been on the section of D1091 between Lac du Chambon and Bourg d'Oisans. The detour on D211a had always seemed more interesting, but I was wrong. D1091 passes through some of the most dramatic landscape I've ever seen, in a valley bordered by steep granite mountains. Definitely worth a visit, preferably on a bike but a car could do in a pinch.

After a quick tour through Bourg d'Oisans, I started up the climb. Not many riders on the road today, but the familiar tour van was there. I stopped for a while at the church at hairpin #7, a little above La Garde, to eat and enjoy the scenery. The rain was mostly holding off, and while it was cold when stopped it was pleasant while climbing.

With the paucity of riders on the road, I was a little surprised to see that the souvenir photographer was nonetheless at work. There was no one near me and I ride very slowly, so she was able to get about five shots of me. And yes, I bought one, even though they're overpriced.

I stopped at the "false top" for a coffee bite to eat at Bar L'Indiana (passing by L'Alaska and La Nevada). When I went to leave it was once again raining hard, so... hey, another coffee.

I climbed up to the real top and took some selfies, which came out poorly. The riders connected with the tour van were just arriving, and one of them was overcome with emotion at finally making it to the top, which just reminds you how special this experience can be.

So now it was over toward the Col de Sarenne, the route the Tour de France took in 2013 in order to climb Alpe d'Huez twice. This route starts by heading out among the hotels on the east side of the village. As I passed by the last of the hotels I could see dark, ominous clouds rolling quickly toward me over the mountain. I didn't have warm enough clothes to deal with any kind of real storm, and I turned around. 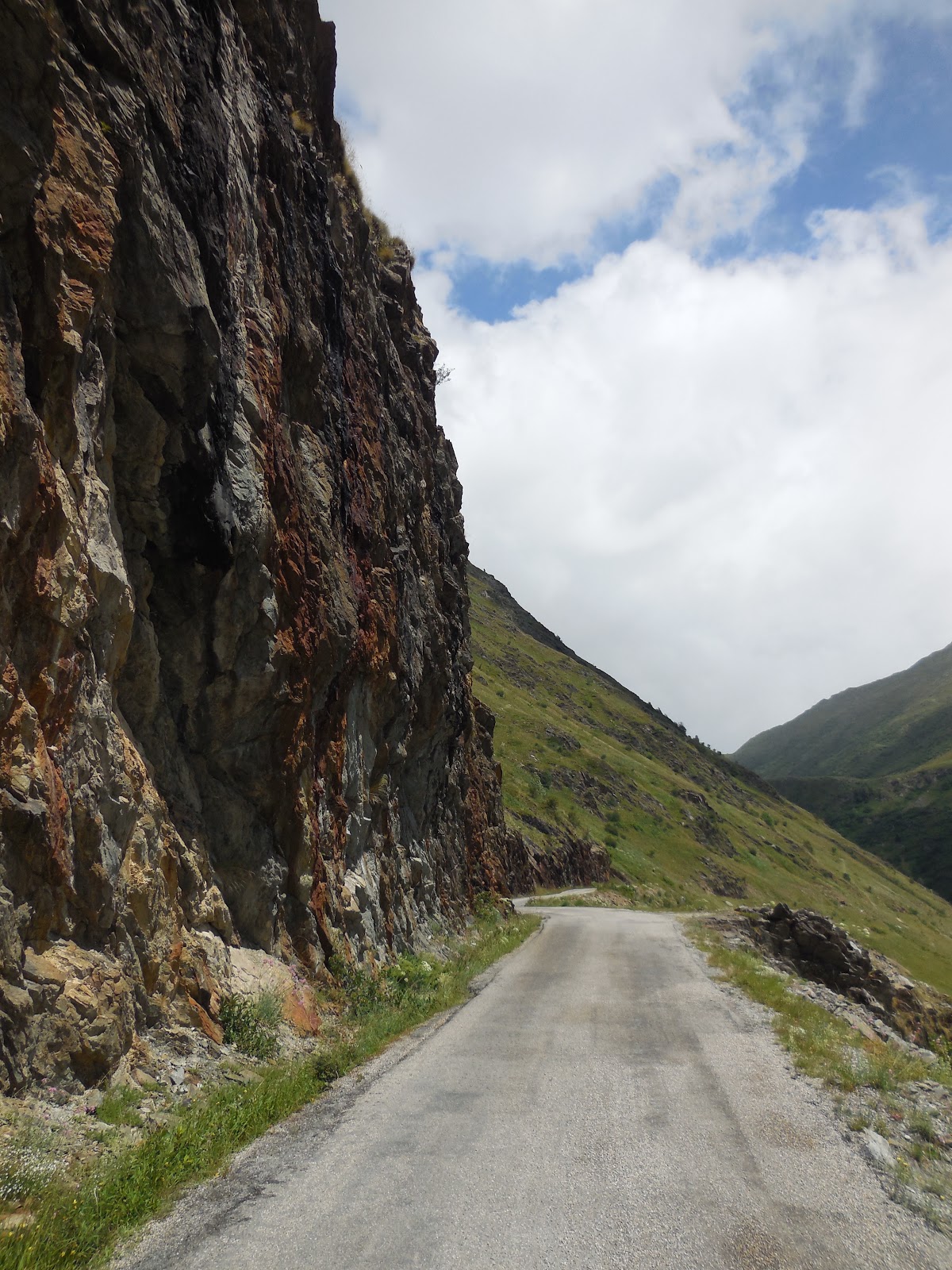 My first thought was to wait it out in some cafe. But one of the first stores I came across was a ski shop having a sale, so... shortly afterward I had bought a new, warm jacket with a hood. Armed with the new equipment, I left again for the Col de Sarenne.

If I recall correctly, there's at least one sign indicating that you're headed toward the Col de Sarenne. Beyond that there isn't the normal signage you see on French roads, but it's hard to go wrong. Just don't descend back to Bourg d'Oisans and you'll get there.

The road passes by the airport (which is not recognizably an airport), then descends a few hundred meters into a lovely, isolated valley. The views here are a reminder that the Alps are vast, and one tends to see little slivers of it. At one point you cross a little stream and then begin this side of the climb, mostly in one straight section. From this direction it's about 3 km long and just a couple hundred meters of climb. It's generally steep at  7.8%, but at least consistent.

If the road up to the pass seemed isolated, after the pass you're in a different world. The road on this side is tiny and not in ideal shape for a descent, an effect heightened by the usual potential of long falls over the sides of the road. And did I mention that in this section it began to rain heavily?

The thing about this descent is that you're not just losing the few hundred meters you just climbed -- you're actually losing more than 1000 meters, essentially descending the mighty Alpe d'Huez climb, but on this little road. It just goes on and on. The first part of the descent winds through hairpins, but then a little further down the sections between turns stretch out quite a bit and you can get some speed up.

After passing through the pretty little village of Mizoen, the road meets the main valley road D1091 at one of those  "I wonder where that goes?" intersections. Similarly, the water coming down through this valley emerges here in the form of the giant fountain that sprays into the reservoir.

By rejoining D1091 here I saved myself a few hundred meters of climbing, although I missed the chance to experience that lovely part of the valley in the opposite direction. I tramped back up to La Grave, my hotel, and dinner. Which started with a welcome tomato soup, then a steak with a 35 cl bottle of a local gamay, topped off by a chocolate tart.

This day's ride was 49.8 miles, with over 6,400 feet of climbing. The most difficult kilometer was in the middle of the Alpe d'Huez climb, in which it averaged 9.3%. As I've mentioned before, that's based solely on climbing; the most uncomfortable kilometer on this ride was one of the early ones, shivering on the descent toward Bourg d'Oisans. And surely the actual most difficult kilometer was part of the descent of the Col de Sarenne. But you get the idea.