Today I slew an already-dead dragon, did some suburban archaeology, and succumbed to a compulsion. All before lunch.

I won't say that I'm in good shape, but having recently returned from a cycling vacation, my condition is about as good as it's likely to get. So what better time to try one of the few local climbs that I've never tried: Bohlman Road and On Orbit Drive. The Stanford cycling page (which has now been updated; how disconcerting!) scared me off years ago, and I've always consigned Bohlman to a set of preposterous climbs not suitable to normal humans. It's really not that bad.

Today was supposed to be reasonably warm, so I got an early start heading over Kennedy to Los Gatos. Since this is part of my daily commute I'm always looking for new routes through here, so today I decided to follow Overlook Drive around. At least I thought Overlook Drive came back around to Route 9, but instead it just dead-ends. To get back to Route 9, without retracing all of Overlook Drive anyway, you take Lucky Drive. That's a one-lane road marked private, but it gets the job done.

While I was in the neighborhood I also visited Montalvo, which up to a couple of months ago I didn't realize existed. It's quite pretty, and worth a visit.

After that it was time to start the morning's major climb. I took a left from Route 9 onto Oak Street, which turns into Bohlman at the cemetery.

Bohlman is steep, no question. The lower parts are a little more forgiving at only about 12% or so, and quite beautiful as the road shrinks in width and climbs through woods.

The road climbs up toward the southwest, then eventually turns toward the southeast and gets distinctly more difficult. Partly that's because the grade really does increase, but also you can see more of the road rise ahead of you, without respite. 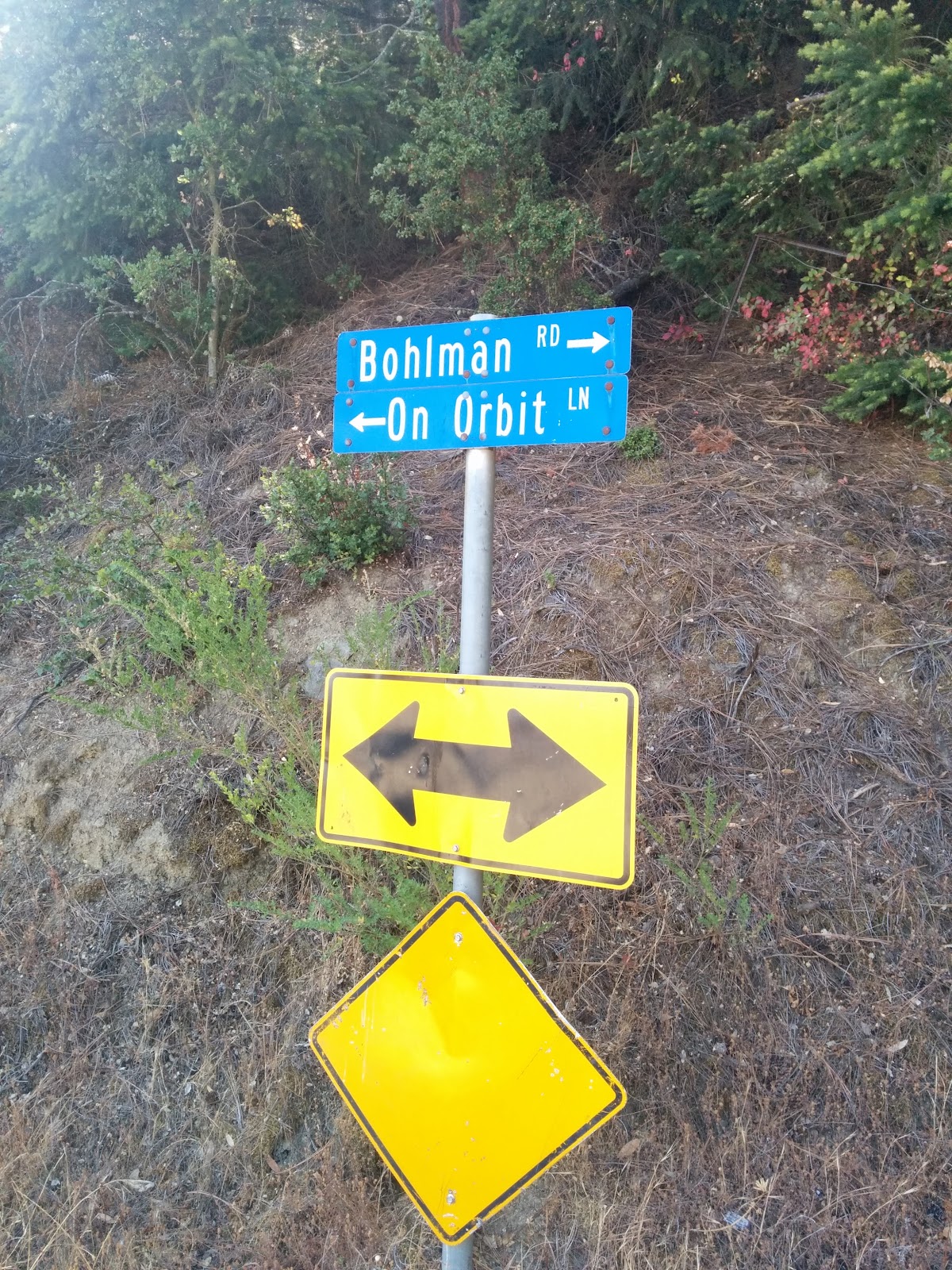 Shortly after this starts you reach the intersection with On Orbit Drive, which peels off to the left. This part is even steeper; the most difficult kilometer of the ride was in this section, averaging a bracing 14% despite a flat section in the middle.

The morning was still reasonably cool, but the top of On Orbit Drive is exposed, and it must get awfully hot in the afternoon.

When people talk about climbs having a maximum gradient of something or other, I always wonder how they're measuring that. I suspect they're using a level, measuring a few meters at most. That's not especially meaningful to a cyclist -- if you can be past the spot in a couple of pedal strokes, it doesn't matter.

My analysis program breaks the ride into approximately 100 meter segments, plus or minus 10 meters as it tries to divide segments at grade changes. Even with that fairly rigorous standard, there were several segments near the top of On Orbit that registered over 15%. And 100 meters of 15% definitely matters.

After one of these extended 15%+ segments you get to the top of On Orbit, and your reward is a brief descent to meet up with Bohlman again. Then you continue climbing, but at moderate grades and with occasional flat sections in which to recover -- it's time to shift out of the granny gear. Five hundred feet of climbing remain, but the hard part is over.

Shortly after reaching the southern side of the ridge, you reach the end, marked by a sign saying exactly that. At this point there's a dirt road that connects with the El Sereno Open Space Preserve. I've come through in the opposite direction so I know where it is, but it's definitely not obvious from this direction, and there's no sign. For the record, it's the dirt road just past the "End" sign, and looks like a driveway from Bohlman.

The short dirt section, well within the abilities of any road bike, leads one to the top of Montevina Road, which twists down toward Lexington Reservoir. Montevina is not a great descent, being a bumpy little road with far too many turns. At least there's not much traffic.

We're experiencing a long drought here in California, and Lexington Reservoir is about as empty as it's been since I moved here. I've heard that in periods like this, bits of the drowned town of Lexington get exposed.
So this time I hiked down into the reservoir to see what could be seen. This involved walking my bike down trails covered in a pretty golden layer of what I only belatedly realized were puncture weed burrs. But I was walking the bike and they were dry, so I got no flats. Still, I carried the bike once I twigged on.

The old alignment of Highway 17 was easy to identify, but I didn't see much in the way of exposed foundations. I'm not sure where Lexington actually sat, so I don't really know where to look.

After tramping around a bit I carried my bike back out to the current alignment of Highway 17, survived the dusty, steep bit on the Los Gatos Creek Trail, and headed home.

I mentioned earlier a slain dragon -- that was Bohlman. The archaeology was in Lexington. The compulsion? The story behind that is that this was actually the second time I've climbed Bohlman. The first time was last Sunday, and several of these photos are from that trip.

I felt like I needed to do it again because my Garmin 500, through some combination of hardware fault, software bug and/or user error, lost the track for that earlier ride. For me, not having a track for a ride -- particularly one that I've not done before -- has become a little like not having done it at all. Oh, who am I kidding? It's a lot like not having done it at all. I try to ensure that I ride only for enjoyment, so I don't focus on timing and (almost) never use Strava. But this bit of completism has been hard to stifle. It's a sickness, undoubtedly.

Today's ride was short but sharp: 34 miles and 4500 feet of climbing, most of it quite steep. The most difficult kilometer was around On Orbit Drive, averaging over 14%, and I can tell you that it definitely seemed that way on the bike, at the time. And yes, the track got recorded correctly this time.
Posted by Ziasus at 3:14 PM